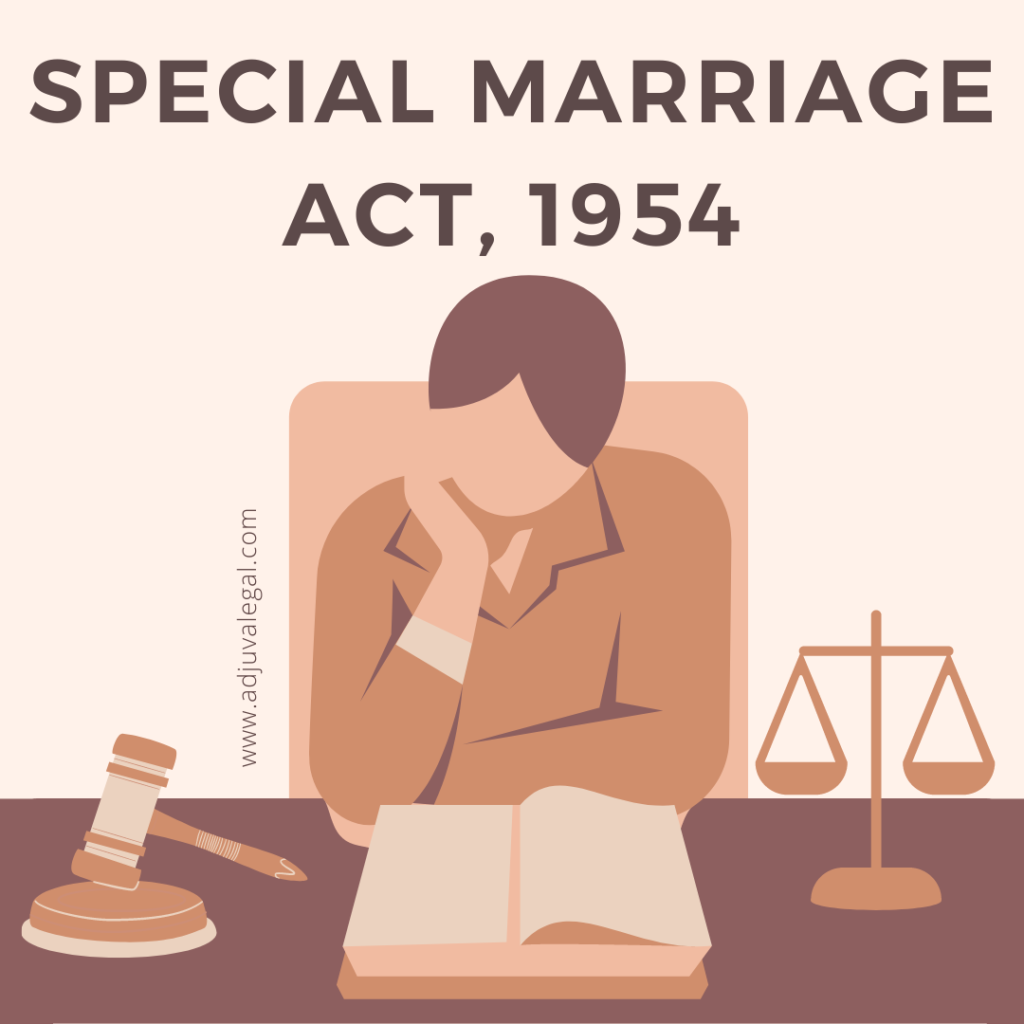 Purpose of this act

The act was enacted as legislation with the objective of establishing secularism. India is a secular country and the same was affirmed by the 42nd Amendment but the stones for the bridge were enforced since the beginning of independence. Special Marriage Act, 1954 affirms the concept of Article 21 that unfurls the Right to life and personal liberty. It shields the consensual solemnization of inter-caste and inter-religion marriages.

Essentials of a Marriage under the Special Marriage act

Section 4 of the act states the essentials for a marriage under this special law.

1. The person must not have a living spouse

5. Where the marriage is solemnized in the State of Jammu and Kashmir, both parties are citizens of India domiciled in the territories to which this Act extends

Section 6 states that Notice of intended marriage.―When a marriage is intended to be solemnized under this Act, the parties to the marriage shall give notice thereof in writing in the form specified in the Second Schedule to the Marriage Officer of the district in which at least one of the parties to the marriage has resided for a period of not less than thirty days immediately preceding the date on which such notice is given.

It is a mandatory concept for registering marriage legally according to Special Marriage Act, 1954.

Section 7 states that if any party is willing to withdraw from marriage, it can be done within the period of 30 days.

Section 13 of the act states that, when the marriage has been solemnized, the Marriage Officer shall enter a certificate thereof in the form specified in the Fourth Schedule in a book to be kept by him for that purpose and to be called the Marriage Certificate Book and such certificate shall be signed by the parties to the marriage and the three witnesses.

Additionally, section 14 of the act states that new notice has to be given if the prior elapsed within 3 months.

Conditions for marriage under SMA

The conditions required for marriage enshrined in section 15 of the act are mentioned below:

(a) a ceremony of marriage has been performed between the parties and they have .been living together as husband and wife ever since;

(b) neither party has at the time of registration more than one spouse living;

(c) neither party is an idiot or a lunatic at the time of registration;

(d) the parties have completed the age of twenty-one years at the time of registration;

(e) the parties are not within the degrees of prohibited relationship;

(f) parties must be residing within the district of the marriage officer to whom notice has been given.

Procedure for registration of a Marriage

Divorce under the Special Marriage Act

Dissolution of marriage under the Special Marriage Act, 1954 is enshrined in section 27. Additionally, the act also affirms the concept of divorce with mutual consent under section 28.